Building Bayesian forecasts for the 2022 midterms

C.A. and the Turing Team

November 8, 1994 was the day the New Deal coalition died. That night, Republicans swept over fifty seats in the House and found themselves in unprecedented territory. After sixty years of Democratic dominance, they were in the majority. Republicans pushed deep into traditionally Democratic strongholds in the South, taking more than half the seats in the region for the first time since 1872. White Southerners had broken off from the Democratic party.

The story of how the post-Depression political order collapsed and Democrats lost control of the Solid South is a story that’s been told in many a think piece. These explainers always go something like this:

During the Civil War, Northern Republicans abolished slavery, and slaveowning Southerners reacted by joining the then white supremacist Democratic party. Following the Great Depression, Democrats added urban Northern progressives to their coalition with a new left-wing economic platform. This New Deal coalition dominated the House until Northern Democrats passed the Civil Rights Act, leading to a Democratic collapse in the South. Republicans like Nixon adopted a new strategy of appealing to white grievances to win over Southerners, and the South has been Republican ever since.

This story is partly true. Desegregation really did drive white Southerners away from Democratic nominees for President in the era from roughly 1948 to 1972, especially in the Deep South. Comparing presidential elections just before and after the Civil Rights Act passed makes this abundantly clear. 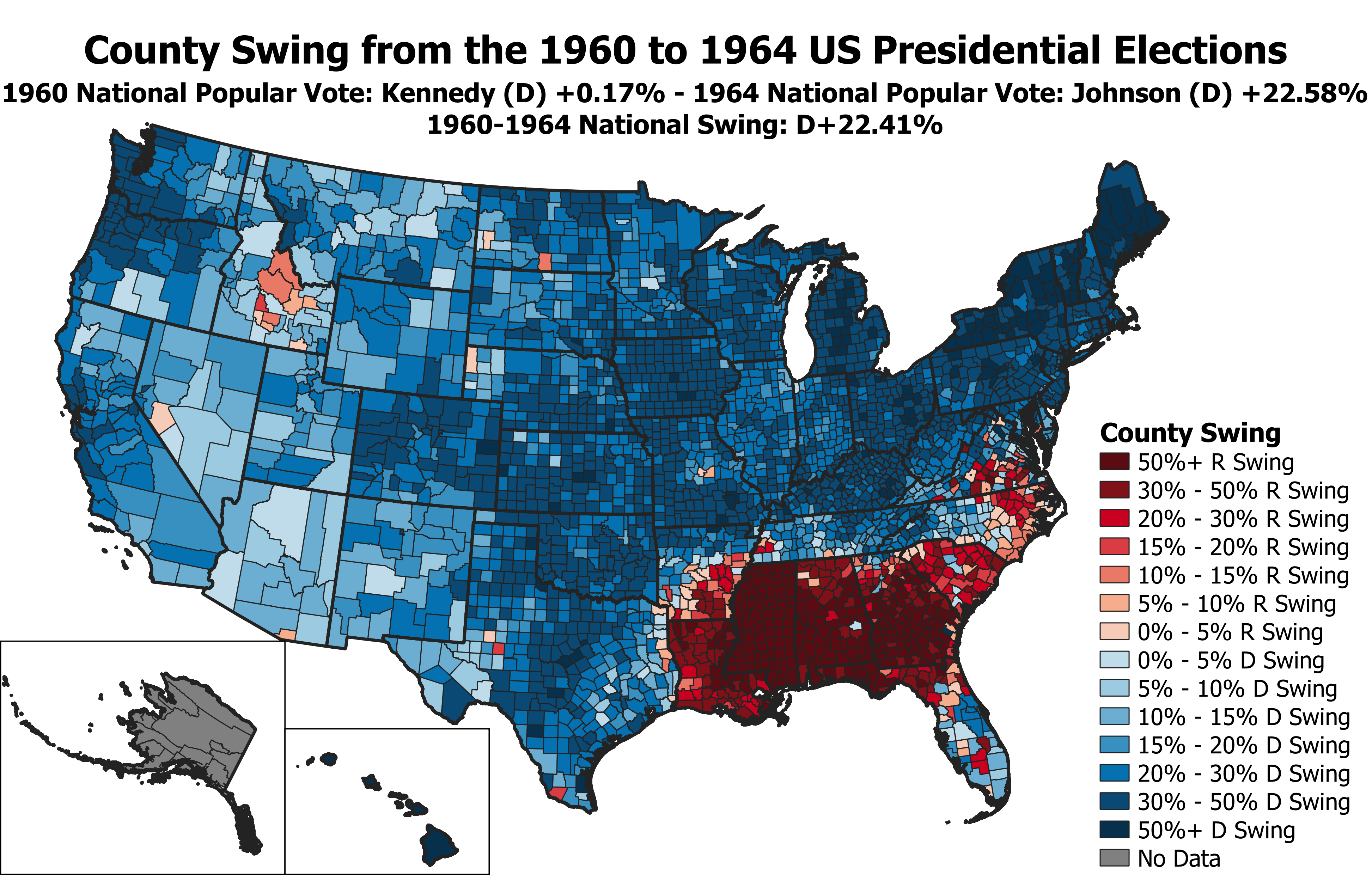 The truth is that Congressional Democrats held because of their divisions, not in spite of them. A united party is a weakness, not a strength.

A handful of Democrats lost elections in the 1960s, but most clung onto power thanks to an unlikely ally: newly-enfranchised black voters. Recognizing their need to win over African-Americans, Southern Democrats abandoned racial segregation in droves. In 1963, Alabama Governor George Wallace infamously barricaded the doors of an all-white school to keep out black students, declaring he stood for “Segregation today, segregation tomorrow, segregation forever!” Forever would come in 1972, when Wallace appointed the most racially diverse cabinet in Alabama’s history, including two African-Americas.

This ideological shift was perhaps even more visible in Congress. Not a single Southern Democrat voted for the Voting Rights Act of 1965, which effectively extended the vote to black Southerners. Southern Democrats were upfront about the racism driving this decision, but many also cited their opposition to Section 5 preclearance, which effectively placed Southern elections under the control of the federal government by requiring judicial review of any proposed voting procedures. In a region famous for its fierce opposition to federal control, this was anathema. Despite this, only 26 out of 108 Southern Democrats would vote against renewing preclearance in 1975.

With Southern Democrats dropping their support for segregation, you could be forgiven for assuming white voters were abandoning their campaigns in droves. While some did, Democrats managed to hold onto a significant share of white voters, enough to consistently win about 80% of House elections in the South. These candidates won by closely matching their constituents’ views on many issues. Southern Democratic congressmen were devout Southern Baptists and economic moderates who opposed new taxes or large spending programs. Newly-elected Southern Democrats like Delaware Senator Joe Biden would build diverse coalitions to defeat the few remaining segregationists in primaries by taking moderate positions on racial issues, combining support for civil rights with opposition to busing and affirmative action. It was these Democrats who would keep the Solid South mostly blue–at first.

This decline in regional voting patterns would provide Republicans with exactly the opening they needed to win back the House, and they would seize it in their Contract with America.

It would not be an exaggeration to call the Contract with America the single most important popular political writing since Common Sense. Previous congressional elections had emphasized winning local races by focusing on local issues. But in 1994, Republicans rallied as many state affiliates and congressional candidates as they could behind a single national platform, the Contract with America. In doing so, the Republican party turned the congressional elections into a referendum pitting conservative policy proposals against Bill Clinton’s congressional agenda. Analyzing data from the 1994 midterms, political scientist Thomas Little found state parties that adopted the Contract significantly outperformed those running local campaigns, even after controlling for factors like voter turnout, presidential approval ratings, the economy, and campaign contributions.

Long-run trends also played a major role in increasing nationalization. Beginning in the 1980s, local news coverage entered a long decline. Many local papers and broadcasters switched to covering national topics, while others closed down, making it difficult for voters to learn about their local congressmen.

In this newly-nationalized climate, the collapse in Bill Clinton’s approval ratings among moderates and Southerners gave Republicans ample ammunition to go on the attack. A series of unpopular policy proposals, including a failed attempt to pass a universal healthcare bill, left many voters feeling Clinton had betrayed his roots as a moderate “New Democrat,” and that other Southern Democrats would soon follow.

Southern Democrats could no longer replicate their decades-long strategy of winning over conservatives by distancing themselves from the national party. The GOP had convinced voters the Democratic party was too left-wing for the country as a whole, so it was up to the country as a whole to reject them. The result was a structural break–a change in the rules that govern a statistical process, like American politics. 1994 was the first truly national congressional election.

We can estimate just how big of a shift this was thanks to our election forecast, which identifies realignments using a Bayesian change-point model. A change-point model assumes that our time series has at least one break, but we don’t know when it happened or how big it is. We simulated the results of 2.1 million possible elections under different sets of plausible conditions. Plotting a smoothed histogram of these results, the difference in results before and after the Republican revolution is dramatic.

By adding up the bins in the blue area we can find Democrats’ chances of winning a typical election. Before 1994, they could count on winning the House about 80% of the time, but both parties have averaged almost exactly half of the two-party vote since 1994.

But there’s something else here that’s important. Our model identifies 1994 as the only major break in the national trend since the Second World War, and assigns very little probability to such breaks in the 1960s or early 70s. While several states saw smaller localized breaks or shifts in regional voting patterns, some driven by Civil Rights, Congress as a whole did not shift significantly towards either party. Political analyst Sean Trende put it quite well when he wrote:

it was [this later] generation, not Thurmond's, that finally [flipped] the South. Did race still have something to do with it? Almost certainly. But you also can't ignore that the South was by that point aligned with the national Republican Party on a wide expanse of issues relating to taxes, anti-communism, school prayer, abortion, the counterculture, Vietnam… Chalking everything up to the Civil Rights Act is overly simplistic, to the point of being incorrect.

The death knell for the New Deal coalition wasn’t the civil rights movement. It was moderate Democrats’ inability to keep their distance from the national party.